Freemasonry has inspired various non-affiliated groups and fraternities, including the Benevolent Order of the Elk, the Fraternal Order of Eagles, etc.

However, few have heard of Der Mops-Orden, translated to English as the Order of the Pug.

What was the Order of the Pug?

It was a Catholic fraternity (meaning that it was made up of Catholics, but it was not authorized by the Roman Catholic Church), and it sounds like it would have landed on the scale somewhere between interesting and crazy. 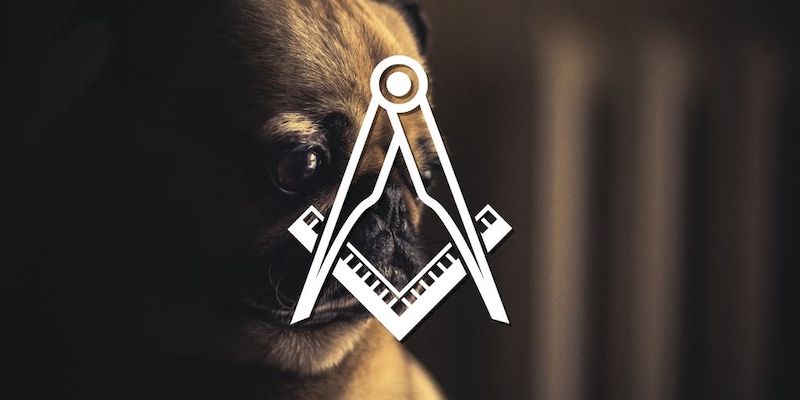 It is believed that the Order of the Pug was established in 1738 (the same year that Freemasonry was first banned among Catholics) in Bavaria by Klemens August, a member of the Wittelsbach dynasty (and the Archbishop-Elector of Cologne).

It is speculated that August created this order specifically to get around the ban; if he could not be a Freemason, then he was going to start his own Order.

Being established in Bavaria, its members spoke German and referred to themselves as Mops (or pug).

Though this Order was not Masonic, it was created in rebellion against the Pope’s ban of Freemasonry and secret societies in general; quite ironic, given that pugs (the dogs, not the members of this Order) are known for their loyalty.

Candidates had to wear dog collars and scratch at the door in order to get in at their initiations.

During their initiations, they were conducted around the room nine times blindfolded, while members of the Order would bark at them to test each candidate’s resolve.

The Order also had a porcelain pug, the backside of which initiates apparently had to kiss in order to express their devotion to the Order.

Pugs claimed to be thumbless (therefore making them more like the dog breed which their name commemorated), describing such a digit as “a little finger.”

Initiations featured such furniture as a table, glass pug statues, a sword, and a toilet. It is unknown why their ritual called for a toilet in the middle of the room.

Members wore silver Pug medallions. To be a member, one had to have the following traits:

The Order was open both to men and to women. Seating arrangements alternated between the sexes. The top offices were those of Grand Master and Grand Mistress.

In 1745, the ritual of the fraternity were exposed in the book L’ordre des Franc-Maçons trahi et le Secret des Mopses révélé (translated as The Order of Freemasons Betrayed and the Secret of the Pugs Revealed), which included both descriptions and illustrations (from which much of the above information is indirectly sourced).

Göttingen University banned a student lodge of this Order in 1748, which looks to be the year that the secret society itself folded.

However, there is a rumor that the Order was active in 1902; I recommend, however, taking that rumor with a boulder of salt.

When I first heard of the Order of the Pug and learned that it was a Catholic order, I originally assumed that it was sanctioned by the Roman Catholic Church; however, this was not the case.

Although it tried to emulate both Masonic and Catholic traditions, it went against many of the values held in each organization.

Nowadays, Catholics have the Order of Columbus (in the Americas, at least), which is permitted by the Roman Catholic Church, and Freemasonry survives.

This article was written for MasonicFind.com by WM-Elect Brandon Cole.