One of the conspiracy theorists’ favorite whipping boys relative to Masonry is Albert Pike, a well-respected author and famous Mason.

Who was Albert Pike?

He was a Confederate general, a lawyer, and a large influence upon the Southern Masonic Jurisdiction of the Scottish Rite in the United States of America. 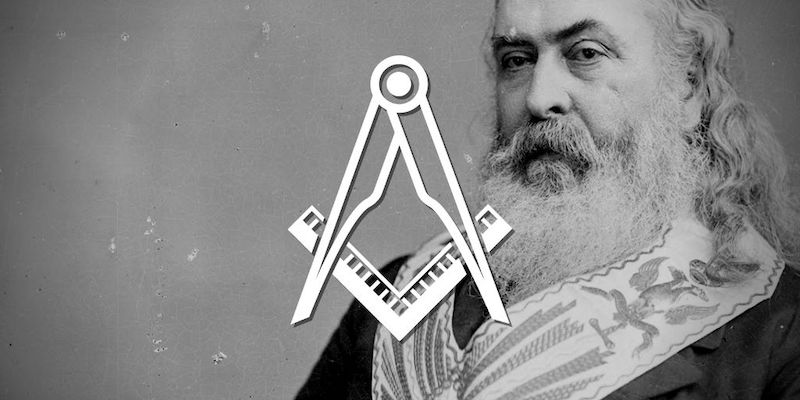 Pike was born on 29 December 1809 in Boston, Massachusetts. He was raised as a Christian and attended an Episcopal church.

Pike was initiated an Entered Apprentice and passed to the degree of Fellowcraft in July 1850 in Western Star Lodge No. 2 in Little Rock, Arkansas; there he was raised to the sublime degree of Master Mason on 4 November 1850.

Two years later, he demitted (or resigned as a member in good standing) from this lodge, later joining other lodges from which he also demitted. He was a charter member (meaning that he was one of the first members) of Magnolia Lodge No. 60, also in Little Rock, where he later served as Worshipful Master in 1854.

Kilwinning Lodge No. 341 in Memphis, Tennessee (one of the lodges that he later joined and later demitted from) made him an honorary member in 1871.

Pike received the 29 degrees of the Scottish Rite from Dr Albert Mackey. In 1858, Mackey invited Pike to join the Supreme Council of the Southern Jurisdiction; Pike took that office in 1859 and remained in that office until he died.

While in this office, Pike profoundly revised the degrees and degree structure of the Scottish Rite as used in the Southern Jurisdiction. This started in 1855 and was approved by the Supreme Council in 1861.

Pike became a lawyer in 1837. He specialized in tribal law, representing various American Indian nations against the federal government.

Pike participated in a cavalry regiment named the Regiment of Arkansas Mounted Volunteers, which fought in the Battle of Buena Vista. He was discharged in 1847.

Pike served over his Indian Brigades. Some of the forces of the Indian Brigades scalped Union soldiers, which was a war crime. Since Pike was responsible for the Indian Brigade, the blame fell upon him, though there is no evidence that he ever ordered or sanctioned such actions. Pike was accordingly discharged from service. 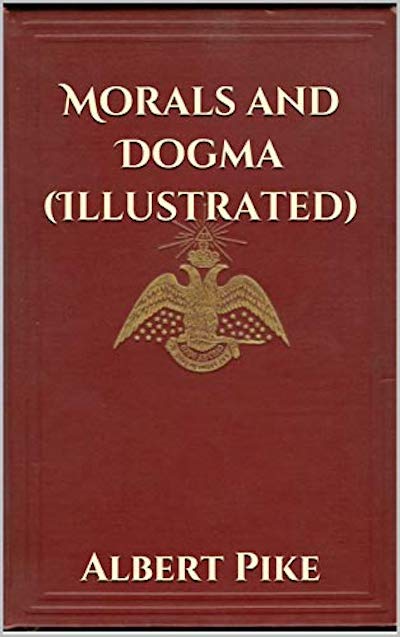 Pike is most well-known by Masons and anti-Masons alike for his opinion-piece Morals and Dogma of the Ancient and Accepted Scottish Rite of Freemasonry, which the Southern Jurisdiction published in 1871.

Morals and Dogma was Pike’s attempt at a study of world religions and how some of the principles thereof could be related to the principles of both Freemasonry and the Scottish Rite.

Many anti-Masons use quotes from this work out-of-context to condemn the Craft (often not realizing that the Scottish Rite, which is simply an appendant/concordant body, has no bearing on the whole of Masonry). One used often reads as follows:

“The Apocalypse is, to those who receive the nineteenth Degree, the Apotheosis of that Sublime Faith which aspires to God alone, and despises all the pomps and works of Lucifer. LUCIFER, the Light-bearer! Strange and mysterious name to give to the Spirit of Darkness! Lucifer, the Son of the Morning! Is it he who bears the Light, and with its splendors intolerable blinds feeble, sensual, or selfish Souls? Doubt it not!”

Anti-Masons often quote this portion of the text, claiming that it is proof that Masons worship Satan/Lucifer.

However, let us break this quote down:

Until 1974, Morals and Dogma was given to those who reached the 14° of the Scottish Rite; since that time, the text given to Masons of that degree is A Bridge to Light by Rex R Hutchens.

Pike has also written other works, among them being Esoterika and Book of the Words.

Pike died on 2 April 1891. Pike was originally buried at Oak Hill Cemetery in Washington, D.C. However, the Scottish Rite later had his body moved to and interred in the House of the Temple, the headquarters of the Southern Jurisdiction.

Because burying him horizontally would have caused too much damage to the integrity of the foundation of the building, he was buried vertically. 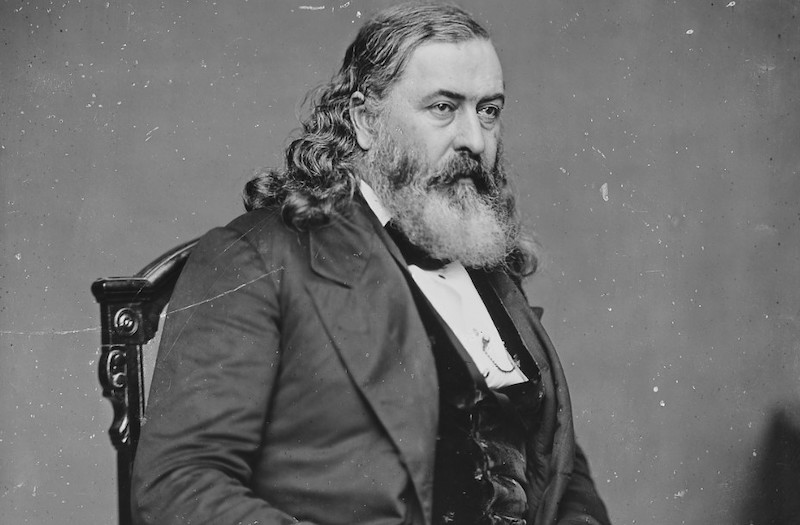 For some reason, Pike has been the target of at least two hoaxes, both of which originated after he died and when (conveniently) he was therefore unable to defend himself or set the record straight.

Having undesirable traits from time as a criminal (financial fraud), he was eventually expelled while only a 1° Entered Apprentice.

Disgruntled, he began to write anti-Masonic literature under the nom-de-plum of Léo Taxil in 1885, claiming that Masons worshipped Lucifer and were generally up to no good.

He feigned repentance of his previous anti-Catholic works and started selling his anti-Masonic writings to the Catholic Church, which eagerly paid him for and published them.

He created a character named Diana Vaughn, whom he passed off as a real figure who has joined a non-existent lodge in the United States. From this character, we get the following quote falsely attributed to Pike:

“That which we must say to the world is that we worship a god, but it is the god that one adores without superstition. To you, Sovereign Grand Inspectors General, we say this, that you may repeat it to the brethren of the 32nd, 31st and 30th degrees: The masonic Religion should be, by all of us initiates of the higher degrees, maintained in the Purity of the Luciferian doctrine. If Lucifer were not God, would Adonay and his priests calumniate him?

“Yes, Lucifer is God, and unfortunately Adonay is also god.

For the eternal law is that there is no light without shade, no beauty without ugliness, no white without black, for the absolute can only exist as two gods; darkness being necessary for light to serve as its foil as the pedestal is necessary to the statue, and the brake to the locomotive.

“Thus, the doctrine of Satanism is a heresy, and the true and pure philosophical religion is the belief in Lucifer, the equal of Adonay; but Lucifer, God of Light and God of Good, is struggling for humanity against Adonay, the God of Darkness and Evil.”

This quote was first printed in 1894 in the book entitled L’Enfant dans la Franc-Maçonneri Universelle (The Woman and the Child in Universal Freemasonry) by Abel Clarin de la Rive.

On 25 April 1897, Taxil called a press conference where he spilled the beans (quite gleefully, it seems) about the lies that he had been telling about Masonry.

His hoax had killed two birds with one proverbial stone: he made Masonry look bad and he made the Catholic Church look foolish.

A few days later, de la Rive retracted the above quote when he learned that Taxil had forged it; de la Rive remained an avid anti-Mason, but he believed in being honest in his criticism of Freemasonry.

This fake quote persists today; many anti-Masons falsely claim that it is written in Morals and Dogma (showing that they have never read the book that they condemn).

A continuation of the Taxil Hoax, it was claimed by William Guy Carr that Pike, in supposed correspondence with Giuseppe Mazzini, wrote that three world wars must occur; the letter was allegedly dated 15 August 1871.

However, these letters have never been proven to have existed in the first place.

Anti-Masons often claim that Masonry must be a racist institution, citing the baseless claim that Pike was a founder and/or high-ranking member of the KKK.

In fact, he wrote against the institution of slavery, identifying it as an evil practice.

This influential man and Mason whose works were and continue to be an influence to millions of people, from his legal representation of American Indians to his writings, is nothing short of inspiring.

The undeserved abuse that his name has endured since his passing is rivaled only by those of a few others.

What Are The Roles of The Wardens in a Masonic Lodge?
What Is Freemasonry? A Quick Introductory Beginner's Guide
Can a Police Officer Become a Freemason?
The Meaning of Mosaic Pavement (Checkered Tile) In Freemasonry
How Can A Freemason Prepare To Be An Officer of The Lodge
Do Freemasons Get Special Treatment?
Notable Freemasons: Old Pete Alexander
Why Do Freemasons Refer To Each Other As "Brother"?