A few weeks ago, we shared an in-depth guide on how to start your process of becoming a Freemason.

For some, however, the journey to Light begins earlier in life, mostly through various Masonic youth groups.

While there are many different Masonic Youth Groups (you can see the entire list on Wikipedia), in this article we will discuss the 3 (most famous) youth groups associated with Freemasonry, which are: 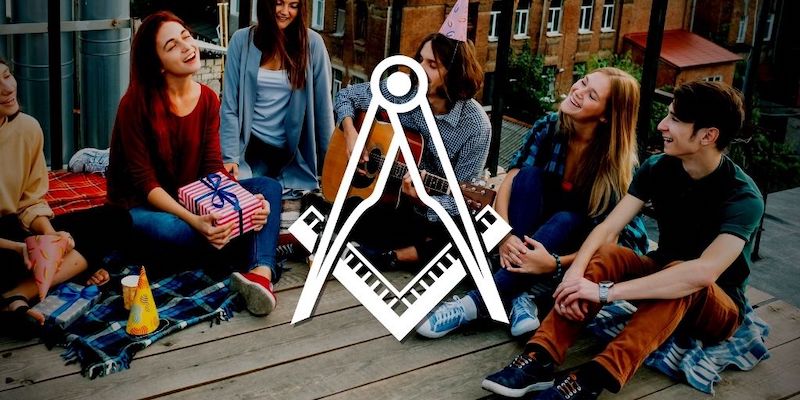 Girls aged 10-20 are allowed to join Job’s Daughters International Youth Group. The group is abbreviated as JDI and formerly known as the International Order of Job’s daughters.

Young girls from different cultural groups and faiths are welcome to join the group.

The most critical requirement to join JDI is having a belief in a higher or supreme being. Lately, Freemasonry abolished the need to have family relationships with a mason to join the group, making it more open to joining.

Adult guidance helps in integrating new JDI members into Freemasonry. Initially, the membership was open to girls aged 13-18 years old, but in a recent review, they extended membership to age 20.

Upon attaining the age of 20, a JDI automatically becomes a majority member, and the same case applies when the member becomes married.

The organization bands girls through spiritual and moral character formation.

The teachings of the group are a veneration of Godly and holy scripture. Members uphold the utmost respect for the elderly, guardians, and parents, which makes the group very exceptional.

The group uses the Job’s Daughters Constitution as a guiding document.

Loyalty to one’s country and its flag is another identification for JDI’s. The constitution usually is referred to as the Book of Job.

The 3 Levels in Job’s Daughters International:

Bethel. It is a place for meetings which can be a church hall, masonic temple, or fraternal hall. The organization is very similar to scout moments.

Grand level. The highest rank of the group and usually has annual conventions at the specific jurisdiction.

Supreme level. The cadre is the first rank with international outreach.

DeMolay International is a fraternal organization welcoming boys aged 13 to 21.

The organization churns out men of respect in different household professions. This brotherhood thrives on character formation and leadership development attributes.

The group began far back in 1244 after a sanction by the Pope for guarding the road between Jerusalem and Acre Port. They were a favorite group in France liked by everyone in their community.

With persistence, the group rose to heroism by amassing great wealth and status in society.

Over the years the group became strong albeit being falsely accused of perpetrating criminal activities.

That did not deter the group from forging on with their goals. Till now, it is a highly recognized fraternal group globally.

Joining the club is straightforward, with no complex requirements whatsoever. Check out what is needed to join:

Meanwhile, the governance and membership of the group revolve around strong virtues. Note that two degrees include the initiatory and the DeMolay degrees.

There are other exciting activities conducted by DeMolays that include fundraising, civic service projects, athletics, and other social gatherings. Planning and organization are the key pillars for the DeMolays.

DeMolays welcomes members from all religious faiths, including Christianity. But, theological convictions are personal and cannot be associated with the group.

The International Order of the Rainbow

The International Order of the Rainbow is another girls group for girls that emphasizes leadership development.

Citizenship, confidence, and leadership guide the members of the group. One visible characteristic portrayed by members are the many fun activities and travels across the world.

During travel to different countries, girls gain invaluable life skills. All these efforts make girls healthier persons who end up becoming a better friend, students, or sisters. Girls in the group participate in numerous worthy causes.

They organize community projects like community clean-ups, fundraising for charitable organizations, and many more. The group is more accommodative for a wider age-bracket for girls.

Any girl aged between 12 to 20 fits well into the organization as long as they meet the other attributes needed for joining.

For advisory purposes, the organization has a guidance board consisting of 15 adults. The committee comprises parents of members and others drawn from majority members. Governance of the board is a very elaborate structure featuring a treasurer, secretary, mother advisor, and board chair.

Close members of the family have a role to play too. Uncles, aunts, parents, and grandparents are top of the mentorship list for the girls.

Christian writings constitute the foundation of the teachings taught by the International Order of the Rainbow.

Here is a summary of the virtues upheld by the Rainbow Girls:

The group emphasizes love from parents, guardians, siblings, and friends. Similarly, they uphold patriotic love for the country. And, through charity, they embody the goodness of humanity. Close family members are trusted confidants and may be present at rainbow meetings.

The colors of the rainbow have great significance in this organization.

Take a look at the meaning of each color here:

Can You Become a Freemason if You Are Disabled?
The 10 Degrees of York Rite Freemasonry (Explained)
What Do The Square & Compasses Mean In Freemasonry?
The History of Freemasonry In China
The Meaning of Mosaic Pavement (Checkered Tile) In Freemasonry
7 Freemasonry Affiliate Bodies For Non-Masons
How Ancient Stonemasons Built Cathedrals
Can A Christian Become A Freemason? (Freemasonry & Christianity)﻿﻿