George Washington, a Founding Father and 1st President of the United States of America once said;

‘Freemasonry is an institution founded on eternal reason and truth; whose deep basis is the civilization of mankind, and whose everlasting glory it is to have the immovable support of those two mighty pillars, science and morality.’

The importance of science in Freemasonry is equal to morality and brotherhood.

During the middle ages, Operative Masons were tasked with knowing more about science than anyone else.

They applied knowledge of mathematics and geometry in the construction of engines, and a little bit of chemistry in the staining of glass.

In this article, we’re taking a look at some of the most famous scientists (who were also Freemasons) as well as investigate the unspoken link between Science and Freemasonry. 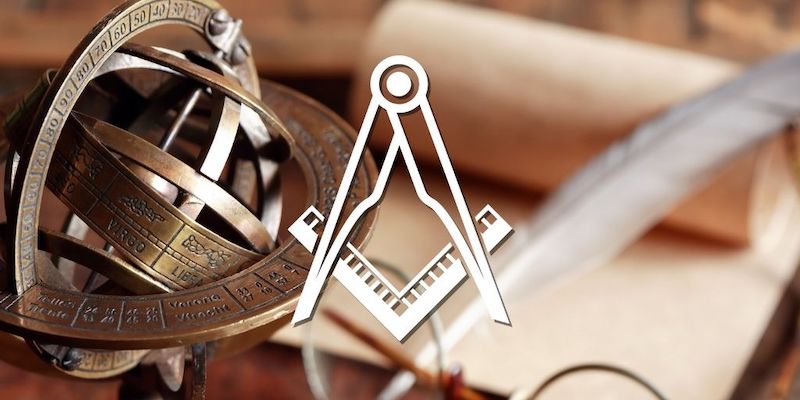 The 4 Most Notable Scientists (Who Were Also Freemasons) 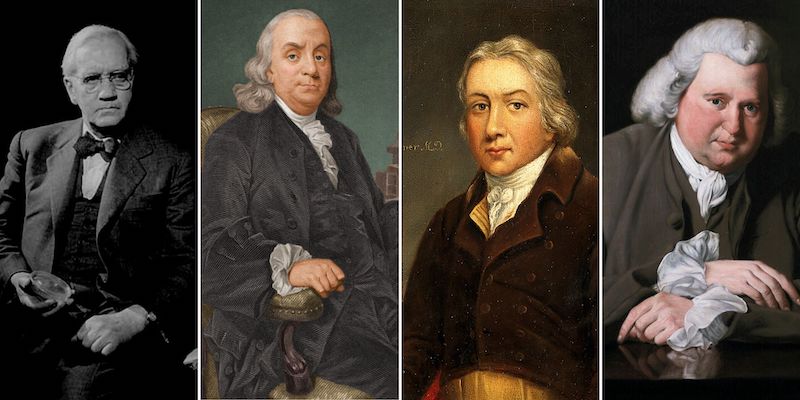 Erasmus Darwin; Charles Darwin’s grandfather and author of the ‘Temple of Nature.’ In his book, he predicted the existence of DNA. He largely inspired his grandson’s work and research on the Theory of Evolution. He joined the society and became a member of St. David’s Lodge No. 36.

Edward Jenner, who was an English doctor who discovered the Smallpox vaccine. His work created a pathway of inventions of vaccines that revolutionized the medical field. He belonged to the Royal Berkley Lodge of Faith and Friendship No. 449

Benjamin Franklin; he formulated the theory of positive and negative electron charges. He ended up inventing the lightning rod, bifocal eyeglasses. He was a member of the Worshipful Master of the Lodge “Les Neuf Soeurs” (Nine Sisters) in Paris.

Sir Alexander Fleming; his research and studies led to the discovery of Penicillin, a strong antibacterial medicine. He was a member of the Past Junior Grand Warden, United Lodge of England.

At the time the order was gaining popularity, everyone in England, including preachers and newspapers, was against the scientists.

People would hurl insults at them as they walked down the streets. Oxford and Cambridge did not offer any science courses. But, Masonic lodges invited members of the Royal Society to lecturer in the lodges.

The lectures involved several scientific demonstrations. As a result, Masonic Lodges gained many scientists from society.

Since the Middle Ages, Freemasons have been the preservers of fundamental science.

The two are interconnected, and the development of Masons is primarily attributed to science. Some of their symbols are mathematical and hold some geometric meaning.

A good example is ‘The Square and Compasses.’

The purpose and interpretation of their symbols are not sacred. It may vary from one lodge to another. Sometimes the letter G in the middle of the logo is said to represent the word Geometry.

The fraternity is often mistaken for a Christian institution; it is not.

The central ideology was that obedience is not based on a religious establishment. Instead, redemption comes from practicing good deeds, being truthful, loving, and being just without being under any religious wing.

Freemasonry has contributed and sponsored some of the scientific studies. Masonic lodges still adopt science. It has also embraced technology in the operations and running of lodges.

The Masonic Royal Society of Science and Arts emerged after the beheading of King Charles 1 in 1649.

Freemasonry’s first meetings were held in 1660 by scholars in Gresham College. They had initially assembled for a lecture by Bro. Sir Christopher Wren, who was a scientist, architect, and mathematician.

Sir Christopher was among the founding members of the Royal Society. Records obtained from the Royal Society state that he completed initiation into the Fraternity of Accepted Mason on May 18, 1691.

Earliest members of the Royal society include;

Freemasons have openly shown their allegiance to science since the beginning of the fraternity.

After the formation of the first Grand Lodge in London in 1717, Britain associated the organization with science.

The involvement of some members and their link to science was the primary reason behind this. For example, the father of the Grand Lodge of London and one of the most serving secretaries of the Royal Society, Dr. John Desaguliers, was Sir Isaac Newton’s closest friend.

Many people credit Desaguliers to shaping Freemasonry in the 18th century.

There hasn’t been sufficient evidence on his involvement in the order since, at the time, the society operated in absolute secrecy. Isaac Newton is the scientist behind the inventions of calculus and the law of gravity.

They are known as the scientific code of ethics.

These are the rules, standards, and limitations that scientists have to follow when conducting studies.

Freemasonry principles may vary from one lodge to another, but there are some which are universal and form the foundation of the Brotherhood.

There are similarities between scientific principles and Freemasonry. This affinity is related to the contribution of early scientists in the association.

For example, Masons operate under strict observation of morality. Symbols such as the Square and Compasses, or other presentations are used to teach the system.

The moral code emphasizes the responsibility of a person to self and others. Scientists, on the other hand, also have a moral obligation to abide to. They have a social responsibility in their studies, research, and how it contributes to society.

They have to be good citizens and scholars for them to fulfill their purpose. Similarities are also seen under the principle of honesty and being knowledgeable.

Still, controversies have arisen about Freemason’s association with religion and science.

Most religions are against scientific discoveries and perceptions of the world. On the other hand, for a person to be initiated into the institution, they have to believe in a supreme being.

What Are The Roles of The Wardens in a Masonic Lodge?
6 Things Freemasons Know How To Do Very Well
90 Masonic Tattoos For Freemasons [VIDEO]
Who Was Prince Hall (& What Is Prince Hall Freemasonry)?
Can a Police Officer Become a Freemason?
Is Freemasonry A Cult (& Can Christians Pray In Lodge)?
Who Speaks Authoritatively for Freemasonry?
6 Tips For The Newly Entered Apprentice In Freemasonry