One of the most-loved, most-admired Freemason and President will forever be George Washington.

Seeing how George Washington is such a celebrated and decorated figure in both US and Masonic history, today we’ve decided to dig a bit deeper and bring forth 8 facts about Brother George Washington (related to his involvement in Freemasonry).

A question we often see asked and one we should address first is:

Was George Washington a Freemason?

The answer to that is YES, and as you’re about to see from fact number one, he was initiated into Freemasonry at the young age of 20. 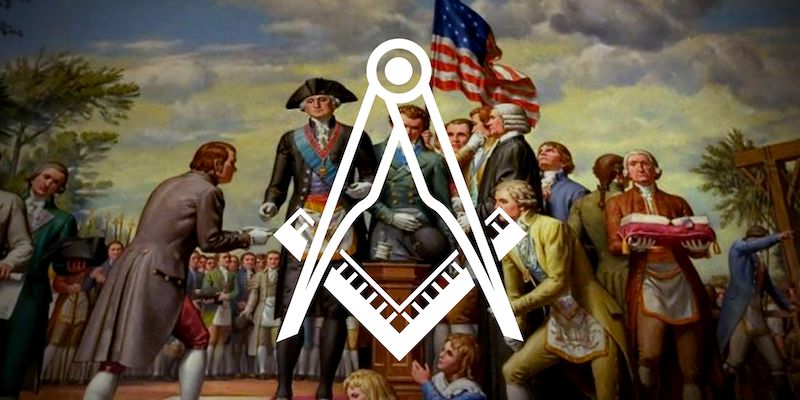 Fact 01: He Became A Freemason at a Very Young Age

George Washington was initiated into the Masonic Lodge in Fredericksburg, Virginia as an Entered Apprentice Freemason on 4th November 1752.

At the time, he was only 20 years old. Ancient records indicate that he paid an entrance fee of two pounds and three shillings to the lodge.

On 3rd March 1753, ten days after his 21st birthday, he graduated to the second degree of Fellowcraft.

A few months later on 4th August, he passed to the third degree of Master Mason. All these events took place in the same lodge.

Fact 02: Masonic Rites Were Performed at His Funeral

During his entire lifetime, George Washington was dedicated to the brotherhood. Even on his deathbed, one of the three doctors who were looking after him was a brother from the Alexandria Lodge.

Washington passed away on 14th December 1799 at the age of 67. As per his wishes, he was not laid to rest until three days elapsed. His funeral was held on 18th December at Mount Vernon.

The Brothers of Alexandria Lodge performed masonic rites to honor his lifelong membership to the fraternity. He was also buried in his Masonic Apron.

The Bible that was used to preside over his funeral is considered a Masonic artifact which is currently owned by Federal Lodge No. 1, Washington, D.C.

What Is A Masonic Funeral?

Fact 03: He is Among The Most Exalted Members of Freemasonry

In his prime years, George Washington was considered an influential Masonic Figure.

Even other leaders acknowledged the fact that he was a prominent symbol to be imitated.

In the whole 19th century, as the membership rose in the entire nation, Washington continued to encourage different lodges in the country.

Today, he is viewed as a role model in Freemasonry. As a person is initiated into the brotherhood and reflects on how they should lead their lives in the fraternity, they relate themselves to legends like George Washington.

Members view him as an icon. It is a constant reminder of how they are privileged to wear masonic gears and follow in the same footsteps as great predecessors.

Records indicate that George Washington was often part of Freemasonry engagements from 1778.

For instance, on 14th June 1779, he was present at the American Union Lodge’s ceremony marking the Feast of St. John the Baptist.

He consistently accepted invitations from his friends and lodges in general to attend any significant celebrations.

Another example is after the American Revolutionary war was over, in 1784, he went to the June Banquet at Alexandria Lodge No.39. In this particular event, Washington got the privilege of being nominated as an honorary member of the lodge.

One of his most prominent Freemasonry activities was held on 18th September 1793.

On this particular occasion, Washington took the role of grandmaster pro tem, as he led the Masonic ceremonial erection of the United States Capitol cornerstone.

Different lodges own the equipment used in this ceremony.

For example, The silver trowel with ivory handle and the wood T-square and level are under the possession of Alexandria- Washington up to date.

While the Marble Gavel with wood handle is in ownership of the Potomac Lodge No.5, Washington D.C.

Fact 05: He Loved The Fraternity

George Washington was a proud member of Freemasons. In his reply to King David’s lodge in Newport, Rhode Island (1970), he clearly indicated his feelings about the order:

‘Being persuaded that a just application of the principles, on which the Masonic Fraternity is founded, must be promotive of private virtue and public prosperity, I shall always be happy to advance the interests of the Society, and to be considered by them as a deserving brother,’

Fact 06: A Masonic Memorial Was Built After Him

In 1907, Grand Masters and recognizable Freemasons gathered at the Alexandria- Washington Lodge Number 22 with one particular purpose.

In one of the early meetings of the organization, President William H. Taft (a mason) said,

‘Brethren, every president of the United States feels heavy upon him the burden of following George Washington and being in his place and making himself in some slight way worthy of the First President, The Father of the country…No honor can be greater than to have a direct association with that great man…as president, as man, and as a mason, all the principles of morality, of patriotism and of religion that we like to think is our highest ideal.’

However, it wasn’t until 1922, that construction officially began. Today the structure, located in Alexandria, Virginia (outside Washington D.C), is a national landmark.

Fact 07: A Masonic Lodge Was Named After Him

After his death, the Alexandria Lodge changed its name to Alexandria-Washington Lodge Number 22.

When Martha Washington died, the lodge obtained important masonic items from his estate. These valuables were well preserved.

Currently, the lodge displays his items in the George Washington Masonic National Memorial.

They also hold their meetings in the same building. Members of the public are welcomed for viewing any day of the week.

Fact 08: He Was The First “Masonic President”

The United States has had over 15 presidents who were members of the brotherhood. Some of them advanced in their masonic career while others did not make any notable progress after initiation.

George Washington was officially inaugurated into the Presidency on 30th April 1789.

This was a historic event for not only the nation but also Freemasonry. He marked the beginning of a long list of other masonic presidents to occupy the seat.

Before his presidency, Washington had risen in rank to the position of Worshipful Master of Frederick Lodge No.4 in 1788, where he had been a lifelong member.

Is Speculative Freemasonry Chinese?
St. John the Evangelist (The Patron Saint of Freemasonry)﻿
The History of Freemasonry & The Hindu Religion
Is Freemasonry Allowed in Islamic Countries?
5 Famous Charities Supported by Freemasons
What Is A Masonic Funeral?
Can A Christian Become A Freemason? (Freemasonry & Christianity)﻿﻿
How To Become A Shriner (& Other Frequently Asked Questions)