Throughout the year, we celebrate various holidays.

It may surprise you to learn that St. John the Evangelist’s day (December 27th) is significant to Freemasons in the United States of America and possibly elsewhere around the world.

Why is St. John the Evangelist’s Day celebrated by Freemasons?

The reason is that St. John the Evangelist is one of the Patron Saints of Freemasonry. 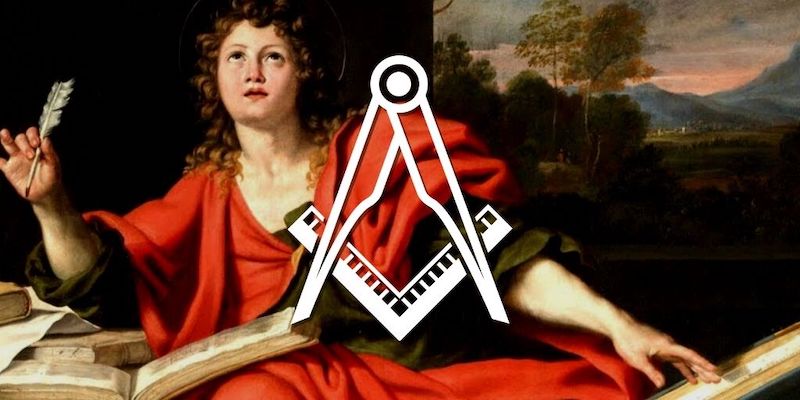 History of St. John the Evangelist

The following is a portion of a brief Biblical history of St. John (source):

One of the Twelve Apostles in the New Testament, a son of Zebedee, and a brother of James. In his early life, he was a fisherman. […] Later he received a call to be a disciple of Jesus Christ. He wrote the Gospel of John, three epistles, and the book of Revelation. He was one of the three who were with the Lord at the raising of Jairus’s daughter, at the Mount of Transfiguration, and in Gethsemane. In his own writings, he refers to himself as the disciple whom Jesus loved and as the “other disciple.” Jesus also called him and his brother Boanerges, “sons of thunder.” There are frequent references to him in the accounts of the Crucifixion and Resurrection. John was later banished to Patmos, where he wrote the book of Revelation. …

One of the Holy Saints

The United Grand Lodge of England was established on St. John the Baptist’s Day, 24 June 1717. Most legitimate Masonic jurisdictions trace their lineage back to this body, whether directly or indirectly.

We learn the following from Dr Albert Mackey’s entry for St. John the Evangelist in his Encyclopædia of Freemasonry:

One of the patron saints of Freemasonry, whose festival is celebrated on the 27th of December.

His constant admonition, in his Epistles, to the cultivation of brotherly love, and the mystical nature of his Apocalyptic visions, have been, perhaps, the principal reasons for the veneration paid to him by the Craft.

Notwithstanding, a well-known tradition, all documentary evidence shows that the connection of the name of the Evangelist with the Masonic Order is dated long after the sixteenth century, before which time St. John the Baptism was exclusively the patron saint of Masonry.

The two are, however, now always united ….

Mackey writes further in an entry entitled “Dedication of a Lodge”:

Tradition informs us that Masonic Lodges were originally dedicated to King Solomon, because he was our first Most Excellent Grand Master. In the sixteenth century Saint John the Baptist seems to have been considered as the peculiar patron of Freemasonry; but subsequently this honor was divided between the two Saints John, the Baptist and the Evangelist; and modern Lodges, in the United States at least, are universally erected or consecrated to God, and dedicated to the Holy Saints John. In the Hemming lectures, adopted in 1813, at the time of the union of the two Grand Lodges of England, the dedication was changed from the Saints John to King Solomon, and this usage now prevails very generally in England where Lodges are dedicated to “God and His Service, also to the memory of the Royal Solomon, under chose auspices many of our Masonic mysteries had weir origin”; but the ancient dedication to the Saints John was never abandoned by American Lodges. 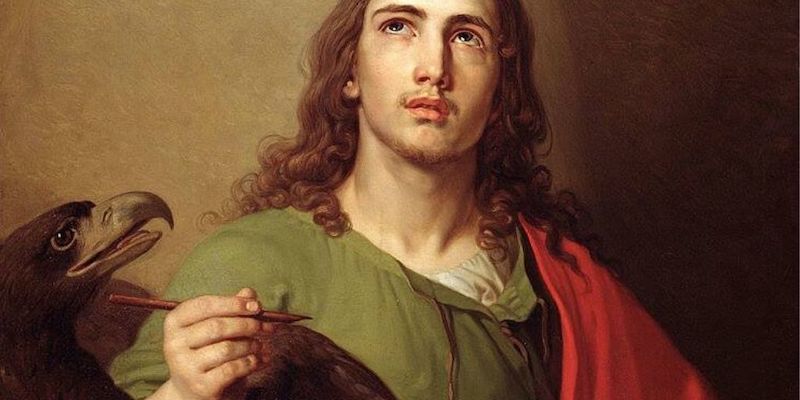 Other than tradition and the fact that the United Grand Lodge of England was established on St. John the Baptist’s Day and that St. John the Evangelist’s Day takes place almost exactly 6 months afterwards, I cannot find any real reason why these two are the Patron Saints of Freemasonry.

However, from the Biblical accounts, we can see the following values in St. John the Evangelist: Brotherly Love, Charity, Truth, Faith, and Enduring Integrity.

Whether you are an adherent to the Christian faith or not, these traits are worthy of emulation.

John the Evangelist seems to be the principal recorder of Christ’s commandments for us to love our neighbors (John 13:34; 15:12, 17) as well as Christ’s words on what the ultimate act of love can be (John 15:13).

He also identifies the source of all righteous love (1 John 4:19).

John has also been called the Apostle of Charity; admittedly, however, this might be solely due to our modern association of him with Freemasonry (source).

He seems also to be the only one who recorded Christ’s words on the principle of Truth and how it sets us free (John 8:32).

John is the only apostle in the Biblical record who did not abandon Jesus Christ in the final hours of His mortality. He also kept his faith despite being exiled to the Island of Patmos, as evidenced by his book of Revelation that he wrote during that exile.

Many grand lodge jurisdictions (including mine) require their subordinate lodges to install their officers on or prior to St. John the Evangelist’s Day;

Some also require that each subordinate lodge’s trustees make a written report to the lodge of all their acts, and of the funds and securities of the lodge in their custody at the December meeting prior to St. John the Evangelist’s Day.

Would any of us be willing to face exile for what we believe to be right? John was.

Is it important to love our neighbors? John thought so.

Is it important that we free ourselves by being truthful? John thought so.

Is John the Evangelist worthy of emulation? Without a doubt, yes.

By emulating what traits of his character that we can find, I posit that we can grow as individuals and as a Fraternity.

No matter what religion or spiritual school of thought to which you subscribe, I humbly recommend making a study of St. John the Evangelist to see what other characteristics of his you can find and emulate not only to be a better Mason, but also a better person in general.

Who Was Prince Hall (& What Is Prince Hall Freemasonry)?
Why Do Masonic Lodges Have Altars?
17 Must-Read Books For Freemasons
4 Appendant, Concordant, & Affiliate Bodies for Masons
Which Members of The Royal Family Are Freemasons?
Can Freemasonry Make You Rich?
7 Masonic Facts About Freemason Winston Churchill
What Is Freemasonry? A Quick Introductory Beginner's Guide