Revolution seems to have followed Freemasonry in a few instances throughout history.

A sizeable minority of the American Founding Fathers were Freemasons; the same applies to a small number of the revolutionaries in France.

It should come as no surprise, then, to learn that some of the revolutionaries in South America were also Freemasons.

As a Fraternity that champions freethought, Freemasonry has seen many causes advocated and advanced by its members, including political ones (even though it in and of itself takes no part in politics).

Likewise, and under less dispute, the movement that led to the independence from Spain in South American countries started among members of a Lodge located in Cádiz, Spain called the Lodge of Rational Knights.

Who were the Masons among the South American Founding Fathers, and what did the Lodge of Rational Knights have to do with them? 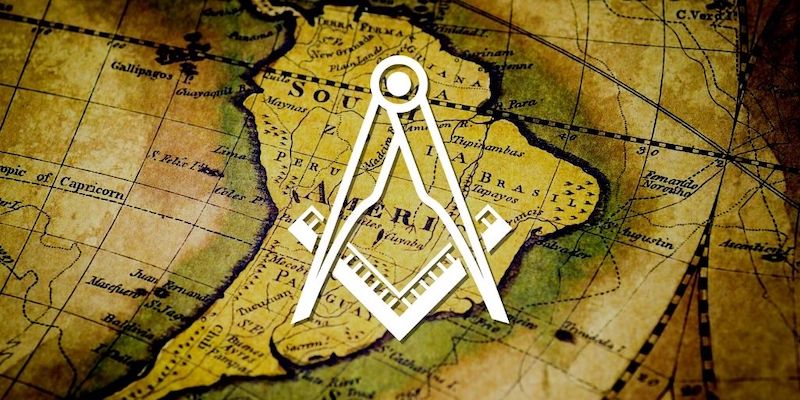 According to Argentinian historian Emilio Corbière, Freemasonry found its way to South America towards the end of the 18th century, influenced by Spanish Masons and not English Masons.

Logia Lautaro was formed in 1810 as a branch of the Lodge of Rational Knights; as time went on, Lautarina Lodges started to appear, and were described as operative Lodges (as opposed to the speculative Lodges which we have today); however, operative did not refer to brick or stonework, but rather to revolutionary objectives.

Formed at the beginning of the 19th century, the Lodge soon after found among its members the famed revolutionary, Francisco de Miranda.

He along with several other officers had fought in the Peninsular War that pitted Spain, Portugal, and their ally Great Britain against the invading and occupying forces of Napoleonic France.

That conflict coincided with the creation of a Spanish Constitution promulgated by the newly formed Cortes de Cádiz (Cádiz Courts) which became a bastion of European liberalism in the 19th Century.

It is from this backdrop that the seeds of independence grew and later developed in the southern half of the New World.

There the Spaniards organized another Lodge secretly, patterned after and employing the same liberal ideas which the one in Spain held. Other previously formed Lodges integrated with this new one.

As the movement of independence grew throughout South America, so also did the spread of Freemasonry amongst its leaders.

Other leading revolutionaries that were initiated in the original Lodge in Cádiz include Bernardo O’Higgins, Francisco de Paula Santander, Antonio Nariño, and (the most famous of liberators) Simón Bolívar.

Here is an in-depth look at the two that stand out among these Freemasons: 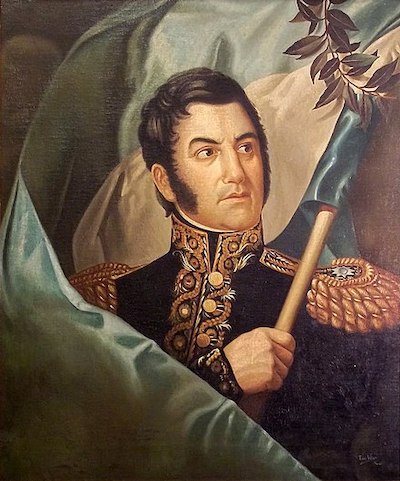 He took part in the Peninsular War against France; he afterward lived in London for a short time where he met several other like-minded liberalists who admired the revolutions in America and France.

San Martín was initiated in the Lodge of Rational Knights in 1811 and became associated with several criollos (American-born soldiers).

Less than a year after his initiation, San Martín was one of the founders of the Lautaro Lodge in Argentina.

The Lodge was instrumental in beginning the actions which would lead to the liberation of Argentina, Chile, and Peru.

After the terms of office of local leaders loyal to the Spanish Government ended, members of the voting council were prevented from attending the vote for renewal of terms.

When this caused a commotion, San Martín intervened with military force and the council was dissolved. A new council was elected, this time with members supportive of independence that led to the beginning of armed conflict.

San Martín was put in charge of the revolutionary forces and initially took a defensive approach, simply hoping to prevent Royalist advances until more soldiers could be enlisted in the cause.

San Martín benefitted from majority support in Argentina and successfully added to it with his victory over Spanish forces at San Lorenzo.

In the battle, San Martín’s horse was killed and the general’s leg was pinned under the dead animal. In this position, he fended off several attempts to kill him before finally being freed by two of his men; but not before he was shot and also suffered a saber wound to the face. Interestingly, the man who shot him (Antonio Zabala) would later serve under San Martín in later campaigns.

With Argentina out of Spanish hands, San Martín turned west towards Chile, separated by the Andes Mountain range. In a bold move, San Martín separated his army into six columns and crossed the mountain range at six different points.

Using dried food and fodder for the horses and mules, all six columns were able to cross. However, the army suffered losses of about 4,000 pack mules and 500 horses. The entire crossing took less than one month to complete.

Immediately upon crossing, the army took actions with success as the royalist forces were scattered throughout the country, secured in defensive positions on attacks from the sea but not from the mountains.

Within a short time, major cities fell under revolutionary control. The battles of Rancagua and Maipú ended Spanish control; San Martín also had help from a naval fleet that prevented any help for the Royalists from the coast.

Once Chile was secured, San Martín turned his attention northward and inland and headed towards Peru.

Here San Martín employed a new strategy: he cut off the Royalists in the capital city of Lima with a siege and then sent deputies into the countryside to promote rebellion among the poorer natives.

He also granted freedom to slaves if they joined the independence forces. He would later meet Simón Bolívar at the Guayaquil Conference, ceding further military operations to his fellow brother Mason.

San Martín was initiated in Logia Integridad de Cádiz in 1808.

San Martín died in France on 17 August 1850, shortly after receiving news of an Argentine victory against the Anglo-French blockade of the Río de la Plata. 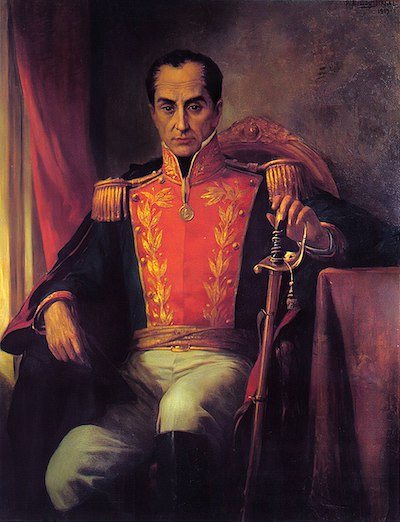 Perhaps the greater of the two is Bolívar, simply called El Libertador (The Liberator). Bolívar was initiated as a Mason in 1803 in Cádiz, Spain.

Bolívar was born in 1783 in colonial Caracas (now Venezuela) to a military family, but saw both of his parents die before age 10.

His aristocratic birth allowed him superior training from some of the most renowned professors in Spanish Colonial America; but he credited his upbringing to a slave nurse his family-owned named Hipólita.

He began his military career at the age of 14 years. Further military training took him to Spain, where he was initiated as a Freemason (in Cádiz) and became acquainted with several liberal military officers that espoused revolutionary ideas; most notably, Francisco de Miranda.

Bolívar returned to Caracas in 1807 and, after a coup in 1810 (with no involvement from Bolívar), he persuaded Miranda to return to his homeland to lead the newly formed republic.

Bolívar was promoted to colonel but immediately tasted defeat to superior Royal forces. Miranda later saw the Republic as a lost cause and capitulated to Royal forces, an act Bolívar deemed treasonous.

Bolívar handed Miranda over to the Spanish in return for a passport to leave the country.

Bolívar did not stay away long, returning in 1813 once again to lead Republican forces against the Royal government. This time, he saw limited success through not the most ethical of standards.

After Spanish Royal troops massacred independence supporters, Bolívar gave a standing order that approved the killing of any “Spaniard not actively supporting independence”.

After successfully establishing the Second Republic of Venezuela, internal power struggles caused divisions and the Royal Army was able to regain control, causing Bolivar to flee the country to Haiti.

There he was able to land a great ally in Alexandre Pétion, the president of the recent independent southern republic. Pétion supplied Bolívar with ships, weapons, and troops for Bolívar to return once again to establish an independent Venezuela.

In 1816, Bolívar returned and, finally with permanence, was able to pry Venezuela from Spanish control. Resulting from his recent experiences, Bolívar instituted two reforms, one of which was good, the other not (though perhaps necessary in the temporary).

He abolished slavery in all the territories he conquered. But due to the internal uprisings of the former Republic he formed, Bolívar did not favor the same type of government.

He basically ruled as a dictator until the Spanish had been fully expelled.

It was not until 1819 that Bolivar instituted a national Congress. At this time, he was also elected President of New Granada and Venezuela.

He continued expanding the liberation of lands from Spanish control and, by the end of 1821, Gran Columbia was formed that included modern-day Colombia, northern Ecuador, Panama, and Venezuela.

In 1822, Bolívar met with San Martín, who had initiated the independence fervor in Argentina and was working his way north. San Martín had instituted the beginning of liberating the territory that makes up Peru and southern Ecuador.

Bolívar took over that task after conferring with San Martín in 1822. The last territory that Bolívar forced free was the country that bears his name: Bolivia. With San Martín and Bernardo O’Higgins, Bolívar had freed all Spanish South America.

With his military mission complete, he returned to Gran Columbia where, despite his many efforts, he failed to keep it united. Indeed, the region was rife with civil wars for much of the next 50 years, though Bolívar would die from tuberculosis at the age of 47 in 1830.

He also joined the Scottish Rite in 1807 in Paris and received the Order of the Temple in France in the same year. He also founded and presided over Lodge Protectora de las Vertudes No. 1 in Venezuala and in 1824 also founded Lodge Order and Liberty No. 2 in Peru.

His Scottish Rite collar and apron are on display in the Grand Lodge of New York’s museum.

From what I can tell, neither the Lodge of Rational Knights nor Lautaro Lodge were constituted by any regular grand lodge jurisdiction; instead, they seem to have been patterned after Masonic Lodges for the purpose of sowing rebellion.

Each of the countries listed here has a regular grand lodge jurisdiction today.

Masonry is not the place for political rebellion to be planted and nurtured; but freethought, which is championed by Freemasonry, is certainly a means whereby such sowing and nurturing can be achieved.

In this situation, Masonic values played a vital role in the planning of revolutionary causes, not only in South America, but also in France and, earlier, in colonial North America.

Bolívar and San Martín, as well as others like Santander, O’Higgins, and Miranda join the names of Paul Revere, Samuel Adams, and Samuel Prescott in the American Revolution and Maxmilien Robespierre, Jean-Paul Marat and Georges Danton in the French Revolution as Freemasons who changed history and overthrew colonial authoritarian governments to secure liberty for the proletariat.

This article was written for MasonicFind.com by Brandon Cole, and his father, Darren Cole.

Was George Washington (Really) A Freemason?
12 Interesting Facts About The Freemasons
Notable Freemasons: Oliver Loving
Freemasonry In The Old Wild West (A Freemasonry Documentary)
5 Famous Masonic Buildings Around The World
Was Jack The Ripper A Freemason?
7 Notable Asian Freemasons You Should Know About﻿﻿
Which Members of The Royal Family Are Freemasons?