One of the most admired/most quoted men in the world has got to be the charming gentleman, Winston Churchill.

But was Winston Churchill a Freemason?

In this article, we’ll be sharing 7 Masonic facts about Sir Winston Leonard Spencer-Churchill, British Prime Minister, Army Officer, author, and an all-around great guy (depending on who you ask).

This fact-sheet should give you a better understanding of Sir Winston’s involvement with Freemasonry.

He Joined The Fraternity in 1901

Winston Churchill was initiated into Freemasonry on 24th May 1901, into the Studholme Lodge No. 1591.

Military and political colleagues surrounded him. At the time, the brotherhood, just like other fellowship societies, was a fashionable social pursuit.

The Studholme Lodge records confirm the date above, his address at 105 Mount Street, age 26, and occupation as an MP (Member of Parliament.)

In his autobiography, Viscount Mersey states that…

‘that month I was initiated as a Freemasonry Studholme Lodge (1591). While waiting for the ceremony I walked round and round Golden Square with Winston Churchill, another candidate….’ (page 188)

Two months later, on 19th July, Churchill was graduated to the 2nd degree.

On 5th March 1902, he became a Master Mason. All of the three ceremonies were conducted in Studholme Lodge.

NB: You can learn more about the first 3 Masonic degrees here.

He Came From a Family Legacy of Great Masons

The earliest membership can be traced to his ancestor Lord Henry John Spencer Churchill (1797-1840), the 4th son of the 5th Duke of Marlborough.

He was one of the members of the prestigious Lodge of Antiquity No.2. By 1834, he was the President of the Board of General Purposes. On 2 September 1836, he was appointed as Provincial Grandmaster for Oxfordshire.

By 1935, he was at the peak of his Masonic career. He was appointed as the Deputy Grand Master and served until 1839. His name is in the Churchill Lodge No.702 (Currently No. 478) founded in his honor.

They were initiated on the 9th of February 1871.

The two, who were brothers, were later excluded from the lodge for not paying their dues but were once again reinstated.

Churchill’s first cousin Charles Richard John Spencer Churchill (1871-1934) 9th Duke of Marlborough was also initiated into the brotherhood on 7 May 1894.

He was Actively Involved in Masonic Petitions

A petition sponsored by the Royal Colonial Lodge No. 3556, signed 22 November 1917 and dated 4 January 1918, was presented to the United Grand Lodge of England for the formation of a new Lodge to be named ‘Ministry of Munitions Lodge.’

There were 95 signatories on that petition. Sir Winston Churchill’s signature was amongst the petitioners. His name has an entry under Lodge number’ clearance certificate attached – Lodge 1591.’ The petition was, however, denied.

After the 1st world war, Clementine Churchill Winston’s wife wrote a letter to her husband’s Private Secretary, Eddie Marsh, on 5th November 1917, seeking his help on behalf of the Ponder End Shell Works petition to the Grand Lodge.

Winston Churchill’s response and subsequent efforts were quite extraordinary. Two days later, on 7 November 1917, he wrote to the Grand Master, The Duke of Connaught. He went a step further in supporting the Lodge’s application.

He joined the first petition. The final petition was submitted to Grand Lodge on 10 December 1917 addressed to the Most Worshipful Grand Master. However, his petition was not granted.

He Declined a Request to Name a Lodge After Him

On 6th October 1943, W Bro E E Natty wrote to Winston Churchill, expressing the desire to form a Masonic Lodge called The Churchill Masonic Lodge. He requested his permission to do so.

According to Mrs. Hill’s, quoting from her response dated in October 1943, ‘…Mr. Churchill would be complimented by your request…(and) would prefer that his name should not be used in this way since he is unable to take a personal part in the Lodge’s activities, the request was denied.

On 10 December 1928, he was the guest of the Worshipful Master W H Bernau, who was his insurance broker, at the Royal Naval Lodge No. 59. During his visit, he signed the attendance book.

The attendance book, his apron, and case are on display in the Library-Museum of Freemasonry in London at Freemasons’ Hall.

His items have been preserved as a token of honor. They affirm his membership to the Studholme Lodge, with an indication in brackets, as his lodge. 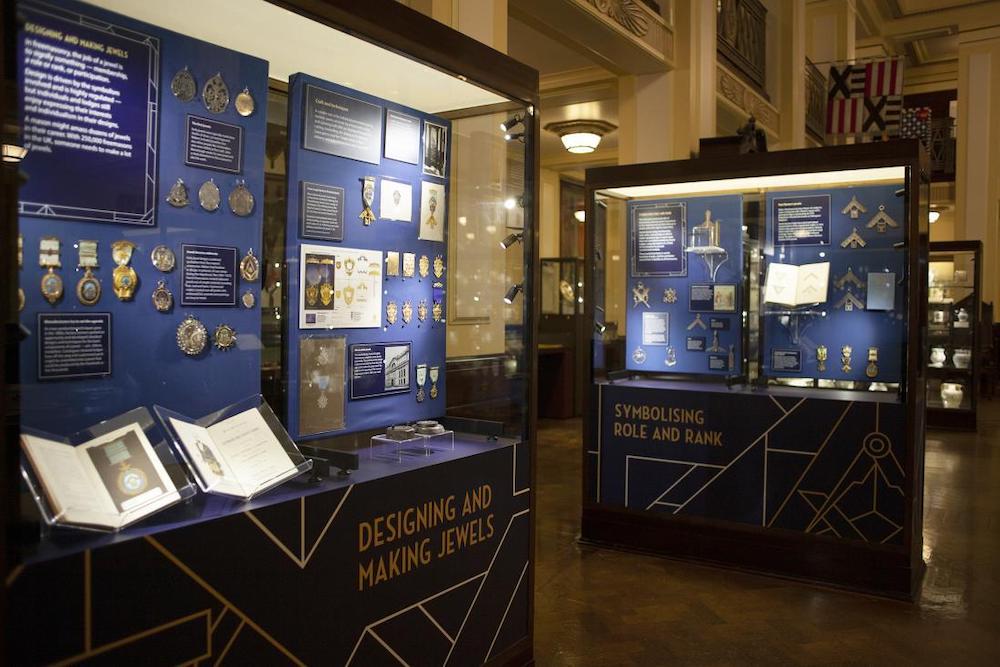 He Resigned as a Freemason Member

Winston Churchill was initiated into the order, the following suit in a long-standing family tradition. His participation in Masonic activities was dormant and minimal.

Quoting from Sir Sydney White, the Grand Secretary between 1937 and 1957,

‘Winston Churchill was initiated as a young man but never progressed in the order and has taken no part for many years.’

By 1912, Churchill was already on the path of fame and political success. In the same year around July, he was charged as First Lord of the Admiralty, to ‘put the fleet into a state of instant and constant readiness for war, in case we were attacked by Germany.’

He was no longer taking part in the activities. Therefore, he resigned from the Studholme Lodge but continued his membership in the Craft. The rest of his involvement in Masonic activities over the following years was sought and voluntary.

Churchill believed in all people having equal rights. He continually fought to give the weaker voices a chance to be heard in the big tables.

His efforts were beyond the call of his immediate interests. This is evident from his willingness to fulfill his wife’s request.

He wrote to the Grand Master, joined the petitioners, signed the cover letter, and chased the Grand secretary for results.

Even though his petition was denied, on 8 February 1918, there is no evidence that shows any emotions or anger displayed on his part. He continued his participation in Masonic activities years to come.

If you’d like to learn more about some notable Freemasons, be sure to leave us a comment down below.

In the meantime, here are the ones we’ve covered already:

Where & When Did Freemasonry Start?﻿ (The Origins Of Freemasonry)
Masonic Fortitude (Masonic Virtues Series)
Should Homosexuality Be Accepted In Freemasonry?
Can a Police Officer Become a Freemason?
How Does Freemasonry Make Good Men Better?
Is Juan Guido of Venezuela a Freemason? (Confirmed)
The Freemason’s Guide To Visiting New York (Masonic Sightseeing)
15 Kings Who Were Freemasons (The Kings of Freemasonry)