Benjamin Franklin is one of the more celebrated Founding Fathers of the United States of America.

Among other things, he is famous for having discovered electricity, for inventing bifocal glasses, and for assisting in convincing Congress to vote for American Independency.

What was Benjamin Franklin’s role as a Freemason?

Not only did he join a celebrated lodge in France, but he also served as Provincial Grand Master. 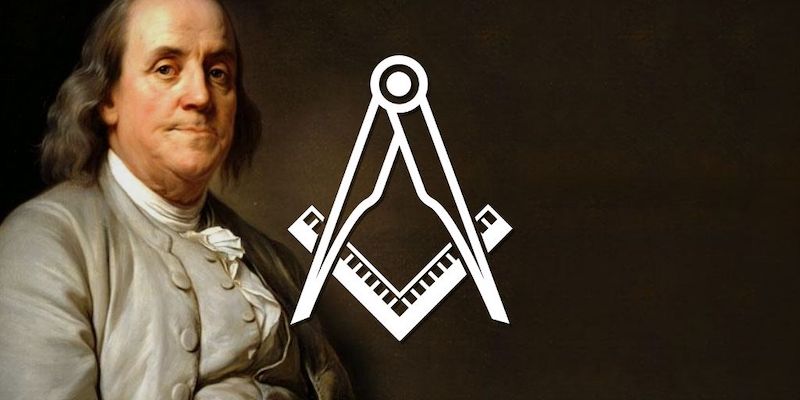 Franklin was born in Boston, Massachusetts on 17 January 1706 to Puritan parents. At age 12, he became an apprentice at a printing press. He later worked for his brother James, who started the New-England Courant in 1721.

Readers were invited to contribute to this newspaper’s content. Ben submitted some content, but his brother would not publish it.

As a result, young Ben decided to write under the nom-de-plum of Silence Dogood, convincing the newspaper and its readers that these letters came from a middle-aged woman of that name; these letters amounted to fourteen in total.

In his Encyclopædia of Freemasonry, Dr. Albert Mackey records that Franklin was initiated in 1731 in the St John’s Lodge at Philadelphia. He writes on:

“In 1734 he was elected Grand Master of the Provincial Grand Lodge of Pennsylvania; and in November of the same year, Franklin applied to Henry Price, who had received from England authority to establish Masonry in this country, for a confirmation of those powers conferred by the first deputation or warrant.

It is probable that the request was granted, although no record of the fact can be found. In 1734, Franklin edited an edition of Anderson’s Constitutions, which was probably the first Masonic work published in America.

“While Franklin was in France as the Ambassador from this country, he appears to have taken much interest in Masonry. He affiliated with the celebrated Lodge of the Nine Sisters, of which Lalande, Count de Gebelin, and other celebrities of French literature, were members. He took a prominent part in the initiation of Voltaire, and on his death acted as Senior Warden of the Lodge of Sorrow held in his memory. The Lodge of the Nine Sisters held Franklin in such esteem that it struck a medal in his honor, of which a copy, supposed to be the only one now in existence, belongs to the Provincial Grand Lodge of Mecklenburg.”

It should be noted that these provincial grand lodges operated at the time under the umbrella of the United Grand Lodge of England.

It is speculated that Franklin lost out on a fortune by never patenting any of his inventions, all of which were designed for practicality.

Among his most well-known contributions is the lightning rod, which he devised in order to redirect lightning away from peoples’ homes. In the 1753 edition of his Poor Richard’s Almanac, he described it thus:

“It has pleased God in his goodness to mankind, at length to discover to them the means of securing their habitations and other buildings from mischief by thunder and lightning. The method is this: Provide a small iron rod (it may be made of the rod-iron used by the nailers) but of such a length, that one end being three or four feet in the moist ground, the other may be six or eight feet above the highest part of the building. To the upper end of the rod fasten about a foot of brass wire, the size of a common knitting-needle, sharpened to a fine point; the rod may be secured to the house by a few small staples. If the house or barn be long, there may be a rod and point at each end, and a middling wire along the ridge from one to the other. A house thus furnished will not be damaged by lightning, it being attracted by the points, and passing thro the metal into the ground without hurting any thing. Vessels also, having a sharp point rod fix’d on the top of their masts, with a wire from the foot of the rod reaching down, round one of the shrouds, to the water, will not be hurt by lightning.”

He also invented bifocal glasses, the Franklin stove, the glass armonica, the flexible urinary catheter, and adapted odometers to measure distance by carriage. 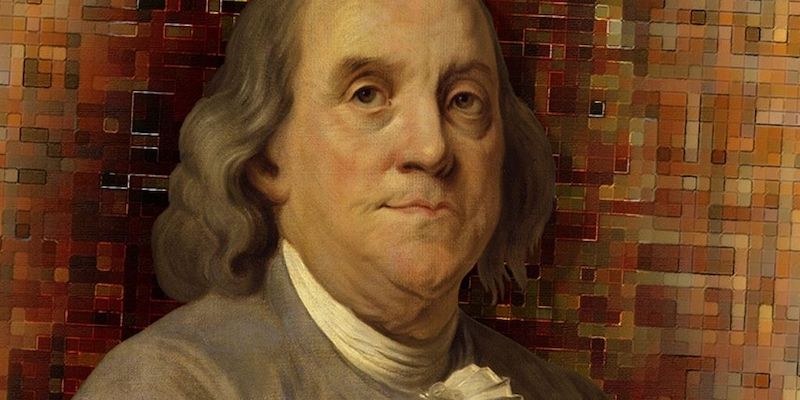 Franklin served as Post Master General twice; once under English rule and again for the American republic.

His then-modern adaptation of the odometer allowed him to figure out what routes were the most efficient for shipping; this was revolutionary for post offices at the time, and resulted in post offices increasing in profits and business significantly.

The Declaration of Independence

With John Adams, Thomas Jefferson, Robert Livingston, and Roger Sherman, Franklin was appointed to serve on the “Committee of Five,” whose purpose was to draft a Declaration of Independence.

Unfortunately, there is no known record of any minutes by this committee, so we do not know how much input Franklin had on the drafts of the Declaration.

The US Great Seal

Benjamin Franklin was the only Freemason on any of the four committees appointed to design the Great Seal of the United States. His design was rejected by Congress; he describes it thus:

“Moses standing on the Shore, and extending his Hand over the Sea, thereby causing the same to overwhelm Pharaoh who is sitting in an open Chariot, a Crown on His Head & a Sword in his Hand.

Rays from a Pillar of Fire in the Clouds reaching to Moses, to express that he acts by Command of the Deity.

“Motto, Rebellion to Tyrants is Obedience to God.”

From 18 October 1785 until 5 November 1788, Franklin served as the sixth of seven Presidents of Pennsylvania; this office was abolished in 1790 and replaced with the office of governor.

Franklin served as Minister to Sweden and later as Minister to France. Towards the end of his life, he was far more respected in France than he was in the United States during his life. His fellow Americans often spoke badly about him because he was a Francophile.

Franklin died of pleurisy on 17 April 1790 in Philadelphia, Pennsylvania. According to an account by Revolutionary War Captain John Jones, Franklin did not die comfortably.

This article only accounts for a drop in the exceptionally large pond that was Benjamin Franklin’s life.

He was an extraordinary man, and the world is better off because of his role in it.

Do Masons Insult Non-Masons with the Word “Profane”?
How To Become A Knights Templar
The Order of The Pug (A Para-Masonic Society)
Was George Washington (Really) A Freemason?
What Questions Will be Asked When Joining Freemasonry?
Is Buzz Aldrin A Freemason? (The Masonic Flag On The Moon)
How Do Freemasons Recognize Each Other?
Freemasonry & The American Revolution