Aspects of Greek History and Greek Mythology are intertwined in the fabric and belief system of Freemasonry.

I have been a Freemason for 15 years and am constantly amazed by the associations that this organization has with ancient civilizations and their beliefs.

Greek and Egyptian influences and those from England, Scotland, Ireland, and mainland Europe blend together in the symbolism and rituals of modern Freemasonry.

In this article, I would like to explore just a few of the more obvious ones. Since it is unethical for me to delve too deeply into our order, general observations will have to suffice.

I will be discussing Euclid 47 proposition, a frontispiece from our first constitution, a belt hook used to tie our aprons, and finally the three graces of Freemasonry. 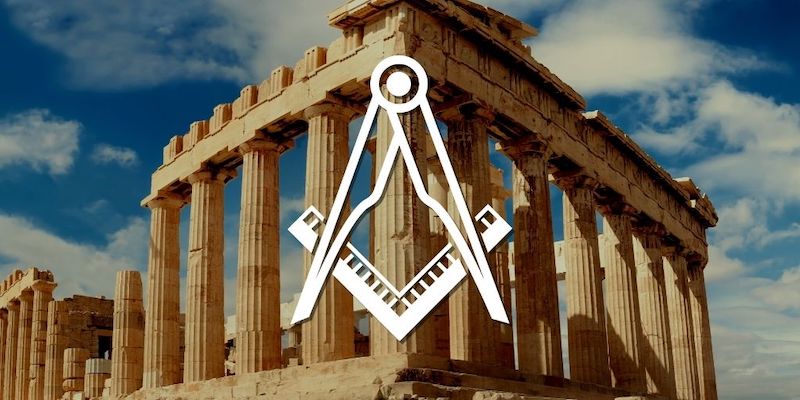 Freemasonry Is The Oldest & Largest Fraternal Organization in the World

Its members share a common goal of helping each other become better men.

Its body of knowledge and system of ethics is based on the belief that each man has a responsibility to improve himself while being devoted to his family, faith, country, and fraternity.

Its roots go back centuries and are founded in the ancient trade of the stonemason.

Stonemasons formed themselves into lodges and developed rules, rituals, and philosophies to govern themselves and by extension, regulate the trade.

The fundamental influences in the trade of stonemasons were the use of geometry and mathematics, which allowed for the construction of buildings such as cathedrals, castles, estate houses and public buildings prior to the rise of the architect.

The stonemasons (known as operative masons) actively guarded the knowledge of geometry and mathematics and their practical application in building construction, limiting it to those who shared their values, beliefs, and philosophies.

The influence of the Greek philosopher Pythagoras and the mathematician Euclid is to be found in every lodge around the world.

Every Master who finishes his year is presented with the Past Master’s Collar and Jewel, representing Euclid 47 proposition solution to the Pythagorean principles laid down hundreds of years before.

To the operative Mason, it afforded a means of correcting his square, for if he wishes to test its accuracy, he may readily do so by measuring off 3 divisions along one side, 4 divisions along with the other, and the distance across must be 5 if the square is accurate.

The knowledge of how to form a perfect square without error has always been of the highest importance in the art of building and was the knowledge that was closely guarded by Masons and might well be considered one of the genuine secrets of a Master Mason.

Pythagoras occupies a special place in our craft and is considered to be a pioneering Mason and his influence cannot be understated.

In one of our lectures, Geometry and Freemasonry are said to be interchangeable terms based on the Pythagorean theory of mathematics.

“The Constitutions of the Free Masons” 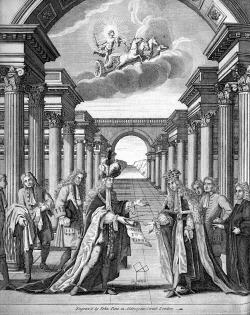 This book contained the History, Charges, and Regulations of the newly formed Grand Lodge in London, published in 1723.

It was the first document detailing the workings of Freemasonry that was made public.

Up until that point, Freemasonry was an organization that existed very much in the shadows.

The scene depicts one Grand Master (the Duke of Montagu) passing the scroll of the Constitutions to the next Grand Master (Philip, Duke of Wharton).

Both Grand Masters are supported by their officers. In the background is a representation of the parting of the Red Sea, recalling the successful flight of the Israelites from the Egyptians to the promised land.

The pillars depict the five orders of architecture introduced to England by Inigo Jones.

At the top of the frontispiece, you can visibly see Apollo in his four-horse chariot doing one of his most important tasks which is to move the Sun across the sky.

Below you can clearly see a representation of the 47th proposition of Euclid, a symbol that is traditionally associated with Past Masters.

The overall impression of this frontispiece is one of achievement where the philosophical beliefs of the Masons, scientific values and traditions of the stonemason craft are blended with the spiritual transcending into what would become the beginning of modern Freemasonry.

These various elements combine to present Anderson’s (the author of the Constitutions) view of history as the careful unfolding of a divine and heavenly plan.

The Masonic apron worn by Freemasons in lodges around the world has been developed from the apron worn by stonemasons (operative Masons) in the middle ages.

The few examples surviving show that the operative apron was fashioned from the skin of an animal, most probably a sheep. It was large enough to cover the wearer from chest to ankles, and it was held up by a leathern thong which passed round the neck.

From each side a thong, firmly stitched, enabled the mason to tie the apron around his waist, and the tied bow tended to fall as end-strings. The use of this rough apron continued for many centuries and was an integral part of a stonemason’s tool kit.

The transition to the apron worn by modern Masons came into use in the eighteenth century. Today’s apron is not tied with a leather thong but with a clasp. This clasp is shaped in the form of a snake and can claim a connection with ancient Greek Mythology.

While neither the snake nor serpent appears in Masonic symbolism or ritual, many regalia-makers have used it to fashion the belt hook on Masonic aprons. Most Freemasons have no idea that this little clasp – in its various forms – has a connection to the past.

According to Greek mythology, Zeus wanted to locate the exact center of the world.

To do this, he released two eagles from opposite ends of the earth. The eagles met at Delphi. Zeus marked the spot with a large, egg-shaped stone called the omphalos, meaning “navel” guarded by a snake called Pytho.

Part of Freemasonry belief is that when a man enters a lodge and is initiated, he comes from darkness into Masonic light.

Light and darkness and death and life are very much entwined in our ritual.

In our final degree, emphasis is placed on this very idea that a man rises from a symbolic death to everlasting light and takes his place among his fellow man.

The Greeks called this figure the Ouroboros, an ancient symbol depicting a serpent or dragon eating its own tail. The name originates from within the Greek language; (oura) meaning “tail” and (boros) meaning “eating”, thus “he who eats the tail”. 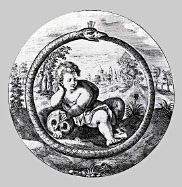 Freemasonry teaches hope in eternal life and promotes the principles of brotherly love and wisdom.

In these attributes, the serpent could be seen to have some Masonic significance and can sometimes be found on old Masonic grave makers.

While the snake plays no active role in the teaching or ritual of modern Freemasonry, it is like many other symbols that have in some way been associated in the past with Freemasonry as it evolved to what it is today.

The Three Graces of Freemasonry 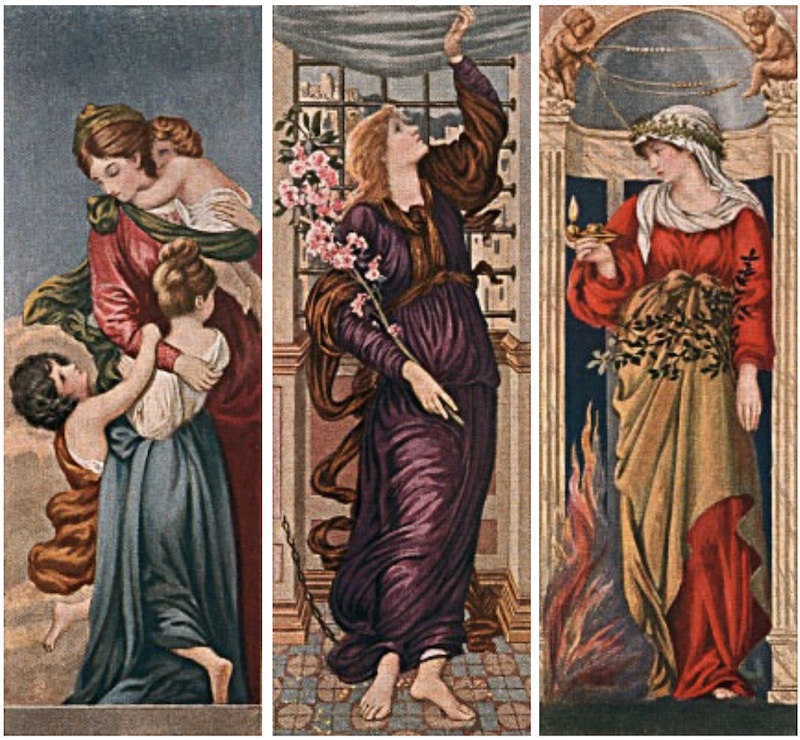 The Three Graces of Freemasonry can be traced to ancient Greek mythology and the Three Graces or charities who were minor goddesses of charm, beauty, nature, human creativity, and fertility.

The name Graces refers to the ‘pleasing’ or ‘charming’ appearance of a fertile field or garden.

The number of the Graces may vary in different legends, but generally, there were three of them, namely:

They were said to be the daughters of Zeus and Hera or of Helios and Aegle. 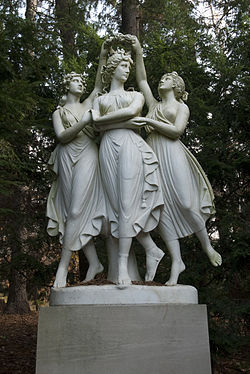 In works of art, the Three Graces or charities were, in early times, depicted being draped with cloth, and later as nude female figures.

In Freemasonry, the Three Graces have evolved through Christianity to represent Faith, Hope, and Charity and are depicted in art wearing fine clothing and highlight some of the fundamental beliefs of all Freemasons.

They are associated with the theological ladder of Jacob, which is referenced in one of the lectures of the first degree. The transition from the earthly plane to the ethereal plane is part of a Mason’s journey.

To ascend the ladder, he must understand the significance and consequence of each grace.

Charity is the virtue by which we help those who need our help, not overtly but in a quiet and gentle manner.

A Freemason lives by the graces of Faith, Hope, and Charity as wells as the Masonic virtues of Brotherly Love, Relief, and Truth.

The four Cardinal virtues of Freemasonry are:

Freemasonry is a strange and unique organization that has incorporated many influences as it evolved through the centuries. Greek Mythology and History have contributed much to its value.

This essay was offered by Chris Foxon, a MM in the Grand Lodge of BC and Yukon.