How do Freemasons greet each other?

This is one of the most searched questions about Freemasonry, because of this organization’s long, secretive history.

It doesn’t give its secret codes and language easily, which perplexes a common person and makes him speculate about this superstructure even more.

Yes, they have been portrayed as a secret society that has a great influence on almost all the governments, but the reality is different.

It is not a secret society anymore.

These days, everyone knows everything about it.

Freemasonry is all about self-improvement and brotherly love. The things that still make it a hush-hush in public are the greetings. People still don’t know how Freemasons greet each other.

It has become a topic of great interest and everyone wishes to know about it. If you are also one of the curious ones, today we will debunk some myths about Freemason greetings and show you exactly which secret codes they use, particularly for their brethren. 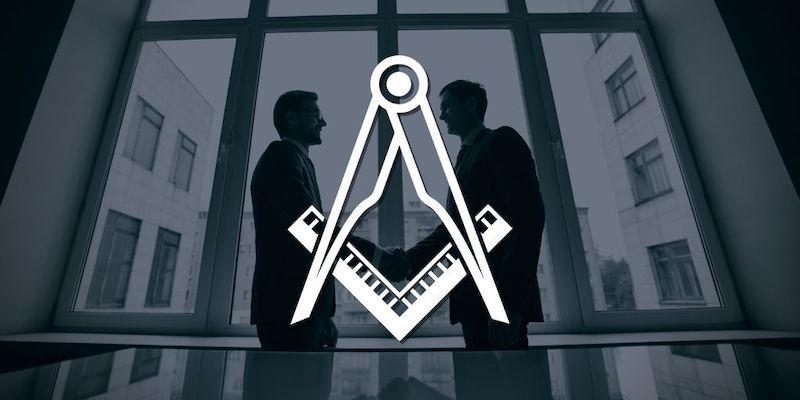 The very first thing you must remember is all the secret greetings are among the Freemasons.

If you aren’t a Freemason, don’t expect them to greet you in a secret way.

It is easy for a Freemason, mostly, to recognize you.

Most members don’t hide in plain sight. They like to show that they are Freemasons.

For example, they use Masonic symbols on their baseball bat, caps, t-shirts, gloves, and et cetera. Furthermore, you can see some Masonic-related stickers on their neckties, book covers, and license plates.

All these small secret details let their brothers from the other lodges recognize them easily.

Though it isn’t required, some Freemasons do that on purpose to find and make connections with the members of other lodges.

We have seen Freemasons who put the Masonic symbols on their business cards and share them openly in public, too.

Apart from this, there are some other things Freemasons do as well.

They make remarks and ask questions, such as:

A common person won’t perceive these questions. He will be baffled in reality or think it’s weird.

But a Freemason will recognize you immediately because these questions and statements have meanings that only brothers can comprehend.

How old is your grandmother?

This question is about your lodge number, which should always be given in whole numbers.

I see you have traveled to the east:

For a Freemason, traveling to the east means ‘searched for knowledge’, and traveled to the west means ‘propagate that knowledge’. You answer the question according to your status and goal in the lodge.

Are you a traveling man?

If you are a Freemason, the answer should be ‘yes. And if they ask where you are traveling from, you can say west to east or east to west.

Have you seen my dog, Hiram?

Have you seen a small dog with a blue-collar? Both questions are almost the same. It is also a popular way to identify brothers.

There are many Freemasons who think all these questions are part of the mythology. These aren’t the actual ways to identify a Freemason.

However, the majorities of adults who are affiliated with Freemasonry disagree with this notion and tell their stories regarding how these questions helped them identifying their brothers and greet them.

Do Freemasons Have A Secret Masonic Handshake?

Yes, Freemasons have secret handshakes and they are quite controversial.

Many anti-Masonic people and even some newspapers claim that these secret codes assist the Freemasons in taking advantage in day-to-day life, especially when they deal with law enforcement agencies or work with other Masons in the business.

But this is far from the truth.

There isn’t any evidence to prove this claim. According to many Freemasons, these claims damage their reputation and make the general public discuss nefarious things about them.

The secret handshake greetings can be divided into some categories, which we will not reveal here, of course. All these handshakes/grips aren’t only the best ways to greet your brothers but also perceive their status and degree in the lodge.

However, all these greetings happen inside the lodge.

They don’t tolerate people talking about their greetings or secret codes in any way outside the lodge. For that reason, it is highly unlikely you will receive the handshake greeting in public.

Among Freemasons, secret greetings are a familiar interaction with friends and brothers.

These kinds of greetings are only shared with selected and elected people of the lodge.

The only things that can help you to recognize a Freemason in public areas are certain phrases.

Those are the only forms of greetings to identify a brother and start an interesting conversation.

Freemasonry & Science (Connecting The Dots)
Freemasons & The 4th of July (Why This Day Is Important)﻿﻿
Freemasonry & Money: Can Freemasonry Benefit You Financially?
Was Jack The Ripper A Freemason?
What is Royal Arch Masonry?
Why Do Freemasons Carry A Briefcase?
Can You Join The Freemasons Online?
How To Become A Shriner (& Other Frequently Asked Questions)