Stonemasons (also known as operative masons) have been around for a long time.

They were the ones who actually built many of the stone structures of ancient civilizations including Stonehenge, the Pyramids, King Solomon’s Temple, and many other grand historical buildings we admire today.

Freemasons on the other hand (also known as speculative masons) are more recent in their history with roots going back to early 1700s Europe when groups of operative masons began popping up that would meet socially.

Freemasons evolved from operative stonemasons and the two “societies” have similarities but also some major differences which we’ll get into below. 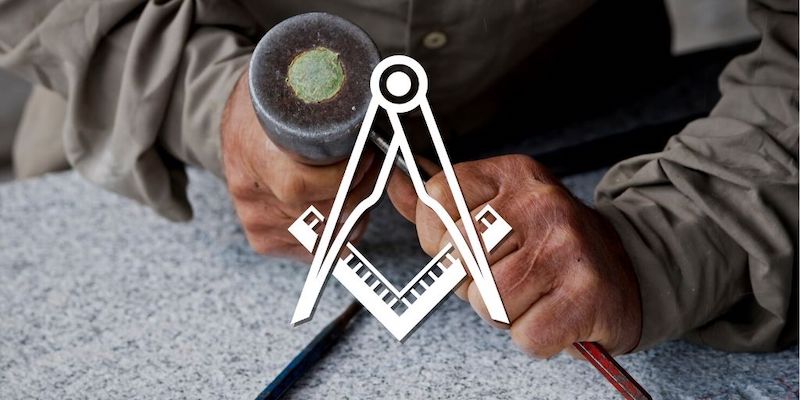 What Is Operative Masonry?

Stonemasonry is a craft and trade that existed for thousands of years.

You can think about stonemasons as the carpenters or builders who actually worked with stone to create structures like Stonehenge, The Pyramids, and the many other beautiful and historical buildings we admire today.

Operative masons were those guys who actually built and constructed these amazing structures.

They were the ones who laid stones, cut blocks of stone for use in construction, and even sculpted them into shapes that would fit together to create a finished structure.

We have a great guide explaining how stonemasons built cathedrals here if you’re interested.

What Is Speculative Masonry?

Speculative Freemasonry is related to operative masonry but was actually an outgrowth of it.

The first Freemason meetings were held around 1717 in England and the term “speculative masonry” was coined to differentiate between operative stonemasons who worked with their hands building structures vs. Freemasons who did not have a physical job but instead met socially or religiously under a common guise of being free Masons.

What Are The Differences Between Operative Vs. Speculative Masonry?

The biggest difference is that operative masonry was a craft/trade while speculative Freemasonry grew out of it to become more of a social organization.

For example, in the early days, stonemasons were typically members of guilds or unions which were very secretive.

There were strict rules governing who could become a member of the guild/union and there was actually some overlap with other fraternal organizations which shared similar secrets.

This led to an interesting dichotomy since people would-be members in two separate groups at once – one group that existed for work or trade purposes while another grew out of it which was more of a social club.

Another difference is that operative masons had strict rules and guidelines they followed to achieve their goals with things like apprenticeships and learning the trade through “journeymen.”

On the other hand, freemasonry lacked those same types of meaningful training standards as well as an actual definition for what it means to be a freemason.

The third difference can get into some esoteric or mystical elements but has nothing to do with the Hiramic myth about Mason’s building Solomon’s Temple which is one of the most well-known stories in Freemasonry and even goes back to operative stonemason history dating back hundreds of years ago.

The idea is that freemasons are a spiritual group vs. operative masonry which was more of a trade/craft association of workers who built structures with stone blocks.

You can think about Freemasonry as more of a club or social organization where dues are paid, meetings are held and people who identify themselves as Masons meet up with other like-minded individuals for camaraderie which often involves discussions on philosophy, religion, or world affairs.

Freemasons are pretty much open to anyone who wants to join in on the club or organization so one way you can think about it is that Freemasonry has no real rules.

On the other hand, operative masons were highly regulated and controlled by their trade guild/union which set strict guidelines for membership based on things like race, religion, ethnicity, social status, and even family history.

Freemasonry only admits men to its membership, whereas stonework was open to both genders (though it is possible that at least in some guilds women may have been excluded from certain aspects of the trade).

In conclusion, Freemasonry has a lot more flexibility for membership while operative masons were far more regulated and had strict rules they followed when it came to membership.

Are All Freemasons Stonemasons Too?

This is the most common myth about Freemasonry which stems from the fact that many of its early members were stonemasons and indeed some lodges started out as part of an actual stonemason guild or union.

The truth is that there are no specific guidelines for membership in Freemasonry and it is not exclusive to stonemasons.

In fact, the only real requirements for membership are that you’re a man and can profess a belief in some sort of Supreme Being whether it be God, Allah or any other deity.

Though many Freemasons have been stonemasons so they do share common historical roots going back hundreds of years ago.

How Can I Join Freemasonry?

The process of joining Freemasonry is said to be a lifelong journey.

If you decide that it’s something you would like to pursue then there are several different avenues for finding lodges or masonic groups in your area which will allow you to join their ranks as well as advance through the different degrees of Freemasonry.

Freemasons do not recruit members so you have to be the one who reaches out and inquires about membership in a local lodge or masonic group which will likely involve going through an interview process with current male members before being allowed into their ranks as well as paying dues on a regular basis.

Freemasonry is an interesting organization that has been around for hundreds of years and if you believe it sounds like something worth checking out then there are multiple ways you can go about finding lodges or masonic groups near you.

The Order Of The Eastern Star (How It Started)
St. John the Evangelist (The Patron Saint of Freemasonry)﻿
How Ancient Stonemasons Built Cathedrals
Freemasonry & Greek Mythology (Symbols & Historical Influences)
Freemasonry, Politics & Religion (What Must Be Known)
Is Buzz Aldrin A Freemason? (The Masonic Flag On The Moon)
Was Aleister Crowley a Freemason?
Notable Freemasons: Benedict Arnold