Freemasons often refer to each other as “a Brother”.

Needless to say, Freemasonry is like one international family, and given how Freemasonry’s main purpose is to “make good men better“;

One thing you will learn about as a Freemason is how to become a better man both inside and outside the Lodge.

Today, we’re taking a look at the 6 ways Freemasonry helps the family grow stronger through the practice of making good moral men better, these are… 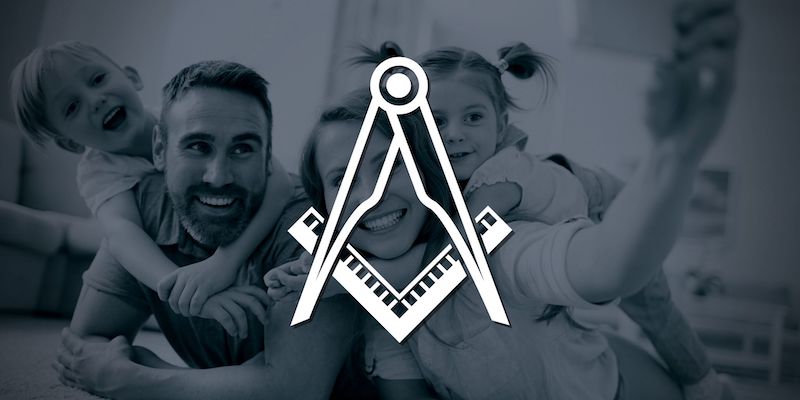 The tradition of joining Freemasonry runs deeply in thousands of families. It can be traced back to the middle ages.

Earlier Masons, i.e., George Washington, Winston Churchill, King Edward (& other Royal Monarchs), had one thing in common; their fathers and grandfathers before them were all Freemasons.

Being part of the craft was considered a family legacy. Although, at the time, only men were allowed to be Masons.

In the 18th century, families lived in one town, city, or state. It was quite rare for people to travel to another country or town when seeking employment. This made it easier to sustain long family traditions.

It was natural for a son to walk in his father’s footsteps and experience the wisdom, knowledge, values associated with the craft.

However, in the current modern times, it is common for people to relocate for employment or educational purposes. This has resulted in mixing different cultures and disregarding family legacies.

The obligation of joining the craft to be part of an extended family tradition is slowly fading away.

The Fraternity has a strong tradition where they don’t ask people to join. Outsiders request to be part of the organization and not the other way round.

Freemasons are therefore prohibited (although not everyone follows the rules) from inviting their sons and grandsons into the craft.

Most Masons get carried away by this obligation and end up not asking their kins to become a member. The art of voluntary participation allows recruits to join the craft due to personal zeal and irk.

But, it is every Mason hopes his sons will join the brotherhood. The bond created by sharing similar ideals and believing in societal institutions is pure and incomparable.

Mason’s who have experienced it term it as ‘there is nothing like it.’ Getting the opportunity to strengthen your natural family bond with utmost pure brotherly love breeds nothing but stronger family ties.

With the current circumstances surrounded by modernization, ultimate freedom, time gap, communication barriers, and institutionalized values, most Freemasons find it three times harder to disclose their involvement in the organization to their children.

In Freemasonry, family involvement goes beyond the normal father-son relationship. The craft is all-inclusive. There are Masonic Youth institutions for children providing equal opportunities to both boys and girls.

The programs are created to equip young people with Masonic values to support the attributes instilled by their parents. They offer a variety of programs focused on youth requirements, i.e., education, sports, and self-awareness.

For example, the DeMolay Foundation was founded to help young men develop into prominent leaders in society. The organization provides mentorship, moral guidance, mentorship to growing males between the ages of 9 and 21.

Additionally, they offer education support and engagement in philanthropic activities.

Also, the Order of the Eastern Star is open male Master Masons, spouses, descendants, and female relatives. It shares similar beliefs as Freemasons. It was primarily built as a Christian based organization whose teachings are based on the old and new testament

Nevertheless, it is open to anyone who would like to join, including non- Christians. The only requirement is to possess a belief in a Supreme Being.

Through these subsidiary organizations, Freemasonry can indirectly cast an all-inclusive net to cover members’ relatives.

Freemasonry is a very discreet society. The craft highly upholds secrecy. That’s why, for over three centuries, very little is known to the public about Masonic rituals or the undertakings in their lodges.

From old-centuries, it was prohibited to expose Freemasonry dealings with outsiders. The name ‘secret society’ originated from the practice of not letting anything out to the public.

It wasn’t solely about the secrets being ritualistic, but it was a way of allowing members to learn about the craft from the inside.

Masons rarely discuss the organization even with close family members. They separate life in the fraternity and normal family relations. Wives or sons whose husbands and fathers are part of the fraternity lack insider knowledge.

The vow of secrecy by Masons is always endorsed regardless of the relationship you have with someone.

Therefore, Freemasonry affects families by building a wall to separate Mason’s family relations with ‘outsiders’ and interactions with one another.

Freemasons are one of the oldest social institutions. Members get the chance to interact with different people and even rekindle old friendships. The network isn’t to be used for personal benefits but for those of the people around.

Networking expands your social circle. This builds up your personal and family connections. Freemasons can use this indirectly to their advantage and help the family.

However, nepotism is highly discouraged in the craft. Freemasonry highly condemns manipulating the structure of the organization to cater to your personal needs.

Nonetheless, meeting someone new will indirectly boost up your interaction levels.

Freemasonry is built on ethical, moral values, helping others, and living well with one another. The institution also highly emphasized the importance of engaging in charitable activities.

All Mason’s strive to maintain a lifestyle of honor, integrity, and philanthropic value.

Through their teachings, Masons can relate well with others though not all Masons are good people. The fraternity surpasses ethnic, cultural, religious, and educational differences.

Members are taught to respect people’s opinions and thrive to grow into decent human beings.

This is reflective of interactions with family members. Mason’s who live and abide by their teachings can raise their family in a similar way.

They grow their kins in a harmonious and productive environment, thus creating an open window for turning into good people.

Freemasons are discouraged from discussing politics or religion. This is directly portrayed by respecting people’s beliefs.

They acknowledge the fact that everyone has a role to play in life regardless of your rooted beliefs. All these aspects are garnered towards encompassing ethical values.

Families with Freemason members are likely to share similar beliefs and emanate positivity in the community.

CLICK HERE to learn more about the many benefits of becoming a Freemason.